An Evening With Mapache


Roscoe is a road dog. The 14-year-old Boston Terrier has been there for the whole ride of Mapache, Clay Finch and Sam Blasucci’s band, which has grown from being the casual project of two longtime buds to one of the most formidable cosmic-folk acts around. “Roscoe’s been through a lot of shit,” says Blasucci, the dog’s formal owner. “He’s been all around the country, come on tour a little bit.” With some bemused pride, Finch points out that, for a few years, he and Blasucci bunked together in a room in the Echo Park neighborhood of Los Angeles that was just big enough to fit two twin beds. “It was the two of us and the dog,” he laughs.

Naturally, Roscoe has found himself the subject of a good handful of Mapache songs in the past—and on Roscoe’s Dream, the band’s third LP of originals, he takes center stage. (That’s him in quilt form on the album cover.) “I Love My Dog” opens up the album with a blissed-out stack of acoustic guitars and a lyrical explanation of one of Roscoe’s many talents: “I love my dog / Keepin’ the policeman out.”

Just as much an easygoing trip with Gram Parsons into the desert as a mad dash with the Grateful Dead away from the law, Roscoe’s Dream is the purest distillation yet of the distinct Mapache sound, which has been brewing for many years now. Finch and Blasucci first met as students at La Cañada High School, just north of Los Angeles: “There wasn’t much supervision or anything,” remembers Blasucci. “It was really nice. And we got to just play guitars together.”

The two stayed friends through their college years—Finch went to Chico State and Blasucci spent two years as a missionary in Mexico—and eventually they ended up back in L.A., spending their days playing guitar together once again, just like old times. Working with producer/engineer Dan Horne (Cass McCombs, Allah-Lahs), they recorded two albums of originals (2017’s Mapache and 2020’s From Liberty Street) as well an album of covers, 2021’s 3. Often trading solos, and occasionally switching from English to Spanish, Finch and Blasucci are now a well-oiled machine.

So when it came time to record Roscoe’s Dream, they didn’t mess with the formula. The band booked some time at Horne’s Lone Palm Studio and called in a handful of friends to play additional parts, including Farmer Dave Scher of Beachwood Sparks on melodica and lap steel on a couple tracks. The family affair has always been how the band likes to work, but this time they approached it on a grander scale than before, recording live as a full group in some cases, as opposed to working over Finch and Blasucci’s initial guitar/vocal parts. “It was a bit more of a band experience,” explains Finch.

Hard to imagine after years of being roommates, Finch and Blasucci are also bridging forward in new ways themselves. After the album was in the can, Finch decided to get a little closer to the water by moving to Malibu, and Blasucci moved about an hour north to Ojai with his girlfriend (and Roscoe, of course). But they’re not worried about the new distance slowing them down: “I think if anything it will be bringing more things to the table,” Blasucci considers. “We’re just expanding out in different directions.” 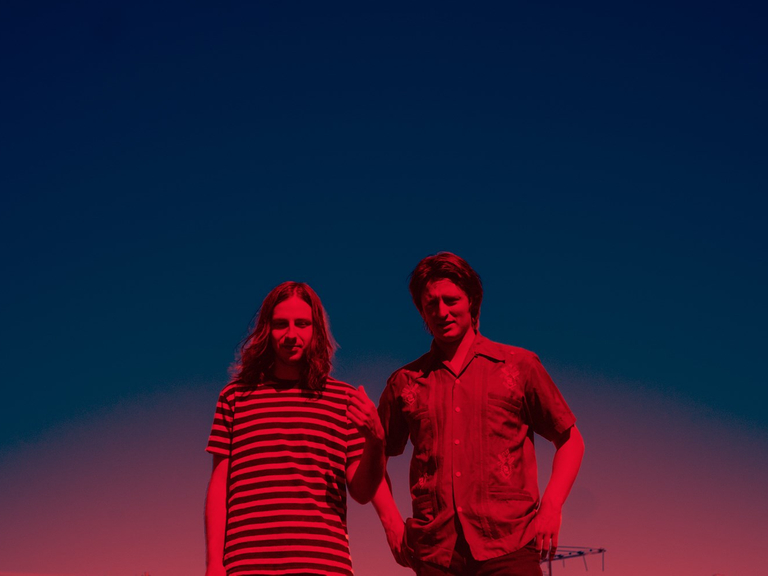 Mapache consists of Clay Finch and Sam Blasucci. Born and raised in Glendale, California, the duo's breathtaking harmonies and heartfelt sound verges on cosmic West Coast Pop Americana. Just months after releasing their critically acclaimed self-titled debut, the duo is back touring with a beguiling new EP titled ‘Lonesome LA Cowboy.’ Consisting of three charismatic covers, ‘Lonesome LA Cowboy’ encompasses decades, genres, and even international borders. Tapping faithfully into an era that ended well before their births, Mapache’s performances here conjure up dry desert breezes and lush coastal canyons with a distinctly southwestern brand of harmony-driven folk and country that’s at once vintage and contemporary. The pair relies on nothing more than acoustic guitars and enchanting vocals to work their magic, pulling influence from the architects of American roots music as well as formative years spent living in Mexico and filtering it all through modern, youthful sensibilities. It’s music with little regard for boundaries or barriers, reverent of the past but fully immersed in the present. “We make music that’s reflective of the landscape we grew up with in southern California,” says Finch. “It’s a big sweep of all the really rich influences you encounter around here: folk and psychedelic and country and Latin and rock and cowboy and Hawaiian. We’re drawing from a really deep well.” Recorded in a similarly stripped-down fashion with producer Dan Horne (Cass McCombs, Allah-Las), Mapache’s self-titled debut introduced the duo’s timeless songwriting and airtight harmonies, earning obvious comparisons to The Louvin Brothers in addition to more cosmic keepers of the flame like Gram Parsons and the Grateful Dead. Aquarium Drunkard hailed the duo as “a blazed up Everly Brothers” and raved that “the LP faithfully radiates the intimate warmth of their live shows,” while No Depression said the album “weds lilting melodies to lyrics that often extol the beauties of nature,” and Saving Country Music declared that the duo “can fill up a room with more soul soaring harmony than most symphonic assemblies.” The music helped earn the band festival appearances from Pickathon to Mountain Jam as well as tour dates with Chris Robinson, Nikki Bluhm, Beachwood Sparks, and more. Though Mapache (Spanish for “raccoon”) only recently began recording, the duo’s roots stretch all the way back to high school, where Finch and Blasucci struck up a friendship over a shared love of skateboarding and classic songwriters. After graduation, Finch headed north to study music at Chico State (birthplace of The Mother Hips, who recently invited Mapache to perform at their beloved Hipnic festival in Big Sur), while Blasucci headed South to Mexico, where he served as a missionary for two years. Their sound is not an exercise in pop nostalgia, but rather a distinctly independent link in a chain that stretches far behind and ahead of them.