Tall Heights w/ The Collection – Presented by 105.5 The Colorado Sound Tall Heights: The third full-length from Tall Heights, Juniors emerged from a period of profound turmoil and revelation for the Massachusetts duo. In the span of five months, Paul Wright and Tim Harrington experienced a convergence of events that included major health and substance-abuse crises among their closest loved ones, saying goodbye to Harrington’s grandfather and to a beloved grandfather figure for Wright, and—in far happier, yet still intense news—the announcement that each of their wives was expecting. Compounded by a series of shake-ups in their professional life, that upheaval coincided with the start of the pandemic. Rather than succumbing to the tremendous pressure of that point in time, Tall Heights chose to confront the chaos by creating within it. The result: an album that precisely channels the pain, uncertainty, and unbridled joy of its inception.

As they set to work on Juniors, Harrington and Wright discovered an unexpected outcome of the loss that they’d endured a shift in mindset that enabled them to embrace a boundless curiosity and exploratory spirit even more powerful than when they first formed Tall Heights (an endeavor that began when Harrington, on guitar, and Wright, on cello, used to busk on the streets of Boston back in the late 2000s). Ina nod to the wide-eyed perspective that arose from the album’s creation, the duo chose a title evocative of youthful wonder. “After everything we went through, we came to a place of understanding that we have no control, that each new day is an adventure we need to approach with beginner’s eyes,” says Harrington. Wright adds: “Through all the discomfort, we took it as our mission to stay humble and hungry, to know that everything will change and to be prepared to find something of real value in that—and to find ourselves in it, too.”

Looking back on the tumultuous year that gave rise to their latest album, Harrington and Wright note that they’ve adopted the Juniors outlook as something of a spiritual ethos: a realization that every new endeavor—no matter how familiar—will undoubtedly present new challenges and extraordinary surprise, ultimately reminding them that they are still but juniors. “I feel ready to view each next chapter of Tall Heights as another round of Juniors,” says Harrington. “This experience has emboldened us to create in any situation—because when life got very intense, we doubled-down on what we care about the most: creating songs together. And it felt fresh and new in that context.” And although leaving the Tall House proved nothing short of heartbreaking, the duo have found their devoted bond to be stronger than ever. “This record gave us the chance to really understand what we have in each other as weird partners on the great journey of self-exploration,” says Wright. “We know now that the Tall House can be a state of mind, not just a place of refuge. So while chaos continues, we’re able to fully see the beauty that can come from it.” 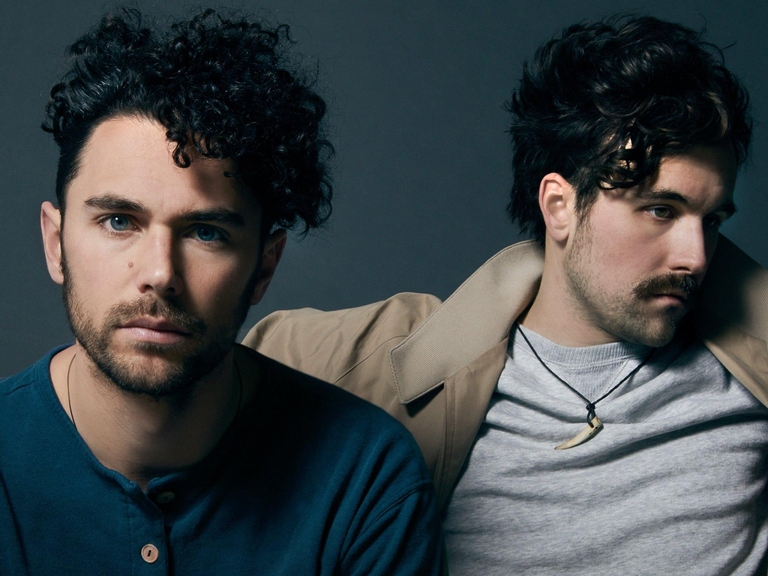 Tall Heights is an electrofolk duo based in Boston, MA. The group formed in 2009 and consists of singer/guitarist Tim Harrington and singer/cellist Paul Wright. Recent touring has also featured percussionist/singer Paul Dumas. Their albums include Man of Stone and Neptune, with their third album Pretty Colors For Your Actions releasing October 2018 on Sony Masterworks. Tall Heights consists of Tim Harrington and Paul Wright, who met in their hometown of Sturbridge, MA. The duo got their start busking in Boston, keeping their songs to the essential elements to make them easier to perform on the street. Shortly thereafter, Ryan Montbleau took the band under his wing after watching them perform at the Lizard Lounge Open Mic Challenge in Cambridge, MA. Ryan and Tall Heights began performing together, eventually releasing an EP All or Nothing / Fast Car in 2014.